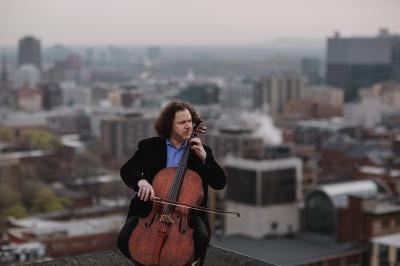 Matt Haimovitz is a Grammy-nominated cellist and is acclaimed for both his tremendous artistry and as a musical visionary – pushing the boundaries of classical music performance, championing new music and initiating groundbreaking collaborations, all while mentoring an award-winning studio of young cellists at McGill University’s Schulich School of Music in Montreal.

Mr. Haimovitz made his debut in 1984, at the age of 13, as a soloist with Zubin Mehta and the Israel Philharmonic, and at 17 he made his first recording for Deutsche Grammophon with James Levine and the Chicago Symphony Orchestra. Haimovitz made his Carnegie Hall debut when he substituted for his teacher, the legendary Leonard Rose, in Schubert’s String Quintet, alongside Isaac Stern, Mstislav Rostropovich, Pinchas Zukerman and Shlomo Mintz.
Haimovitz’s recording career encompasses more than 20 years of award-winning work on Deutsche Grammophon and his own Oxingale Records, in partnership with PentaTone Classics. His recent recording with pianist Christopher O’Riley, Shuffle.Play.Listen (Oxingale Records), celebrating the evolution of the listening experience since the iPod, has received unanimous acclaim. The duo follows with BEETHOVEN, Period., a traversal of Beethoven Sonatas and Variations performed on period instruments.