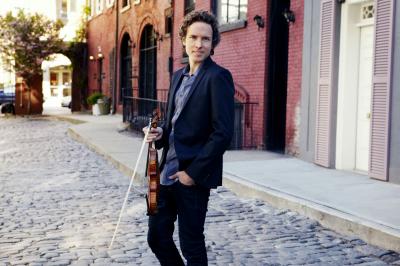 Tim Fain Avery Fisher Career Grant-winning violinist Tim Fain, was seen on screen and heard on the Grammy nominated soundtrack to the film Black Swan, can be heard on the soundtrack to Moonlight and gave “voice” to the violin of the lead actor in the hit film 12 Years a Slave, as he did with Richard Gere’s violin in the film Bee Season.

Recipient of the Young Concert Artists International Award, he has appeared internationally as soloist with the American Composers Orchestra at Carnegie Hall, Baltimore Symphony and Cabrillo Festival with Marin Alsop, the Orchestra of St. Luke's, Pittsburgh, Hague and Buffalo Philharmonics, Mostly Mozart Festival Orchestras, and National Orchestra of Spain.

His recitals have taken him to the world’s major music capitals, he has toured with Musicians from Marlboro, and as a member of the Chamber Music Society of Lincoln Center, and around the globe in a duo-recital program with Philip Glass. His multi-media solo evening Portals premiered to sold-out audiences on both coasts and continues to travel world-wide. The centerpiece of the evening is a new work written for him by Philip Glass, and features collaborations with Benjamin Millepied, Leonard Cohen, film maker Kate Hackett, radio personality Fred Child. He has collaborated with an eclectic array of artists from Pinchas Zukerman and Mitsuko Uchida, the Mark Morris Dance Group and New York City Ballet, Iggy Pop, Rob Thomas (Matchbox 20), Bryce Dessner (The National), and he has performed for the Dali Lama. His discography includes River of Light, (Naxos), and Philip Glass: The Concerto Project IV with the Hague Philharmonic and Tim Fain plays Philip Glass (Orange Mountain Music), and First Loves (VIA).