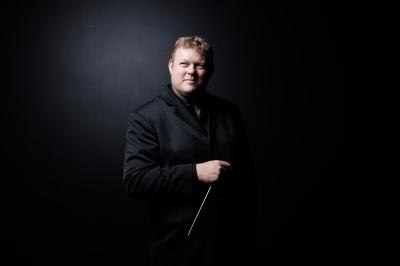 An energetic and compelling figure on the podium, Norwegian conductor Rune Bergmann (pronounced Rue-na Bairg-mahn) is a dynamic, versatile conductor with an extensive classical, romantic, operatic and contemporary repertoire. Considered among today’s most talented young Scandinavian conductors, his elegant interpretations and reputation as an inspiring and profound musician continue to attract the attention of orchestras throughout the world.

Principal guest conductor of Lithuania’s Kaunas City Symphony Orchestra since 2013, and artistic director of Norway’s innovative Fjord Cadenza Festival since its inception in 2010, among the distinguished orchestras and opera houses abroad with which Maestro Bergmann has developed relationships are the Oslo Philharmonic Orchestra, Norwegian National Opera, Mainfranken Theater Würzburg, and Philharmonie Südwestfalen, as well as the symphony orchestras of Malmö, Helsingborg, Bergen, Kristiansand, Stavanger, Trondheim, Karlskrona, and Odense, and Lisbon's Orquestra Sinfonica Portuguesa. In North America, he has guested with such orchestras as the Alabama Symphony Orchestra (where he led the world premiere of Grawemeyer Award-winning Serbian composer Djuro Zivkovic’s Psalm XIII), Detroit, Grand Rapids, and Houston Symphony Orchestras, the Calgary and New Mexico Philharmonics, and the Brevard Music Festival.

Upcoming highlights of Bergmann's 16/17 season include return engagements in Calgary, Lisbon and New Mexico, as well as North American debuts with the Edmonton, Hawaii, Pacific, and Toledo Symphony Orchestras and the Wrocław and Argovia Philharmonics in Europe. The 16/17 season also marks the beginning of Bergmann's tenure as the new Artistic Director and Principal Conductor of the Szczecin Philharmonic in Poland.