The history of music for everyone – poems 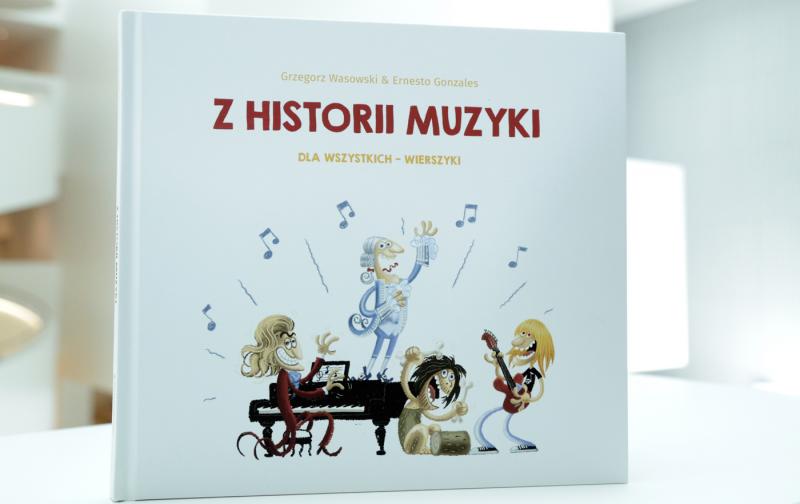 Mozart, Chopin, Wagner and The Beatles – the greatest masters of music, in humorous poems and drawings for children. The first illustrated history of music has been prepared for the youngest music lovers by the Mieczysław Karłowicz Philharmonic in Szczecin.

The premiere was held on May 28, 2016 at the Philharmonic in Szczecin.

"The merchant knows it as do the jockey and mohawk, who Johann Sebastian Bach was, born in Eisenbach. He who, I can swear, composed over a thousand songs there"- this is how the Baroque chapter begins, depicting the figure of one of the greatest European composers. The picture shows a caricature of a musician sipping coffee and smiling at the little reader. In the following parts it becomes more and more fun – all thanks to the two authors: Grzegorz Wasowski and Ernest Gonzales, who never forget to whom they are directing their unusual story.

“Z historii muzyki dla wszystkich – wierszyki” (in English: "The history of music for everyone – poems") is the fruit of a collaboration between a famous satirist with a popular young illustrator. It is a story of serious music (and not only) told with remarkable humour. The authors carry children through all the ages: from prehistory and antiquity through the Middle Ages, Renaissance, Romanticism to the present day. Each era is represented by one composer. Among the greatest names of Johann Sebastian Bach, Joseph Haydn or Ludwig van Beethoven, also stars of the twentieth century music appear. An extremely funny procession of great composers is concluded with chapters about the Beatles, Jimi Hendrix, Miles Davis and the famous German band Kraftwerk.

The colorful setting and original form of the book tame this seemingly difficult content, and thanks to the sense of humor of the makers, the great composers turn out to be a nice people with traits close to our hearts. All this makes the latest proposal of the Philharmonic in Szczecin not only an unusual way for the first meeting of the youngest readers with music, but above all it offers a different look at its history – with a distance and a pinch of salt.